type in your search and press enter

For those living in Chandigarh , and more so for the youth that is an integral part of the city beautiful now , the Gheri Route is iconic and forms an integral part of their daily lives . My nephew who has just moved here from Mumbai via London ,and is now pursuing an academic career in one of the ‘elitist ” schools of Chandigarh, got invited to and evening of fun on the Gehri Route – an experience that left him confused , for reasons he could not describe ,of the experience was subjugated to , that evening . Simply , I explained to him , the confusion was because he did not understand what the Gehri Route was all about , for Chandigarhians . 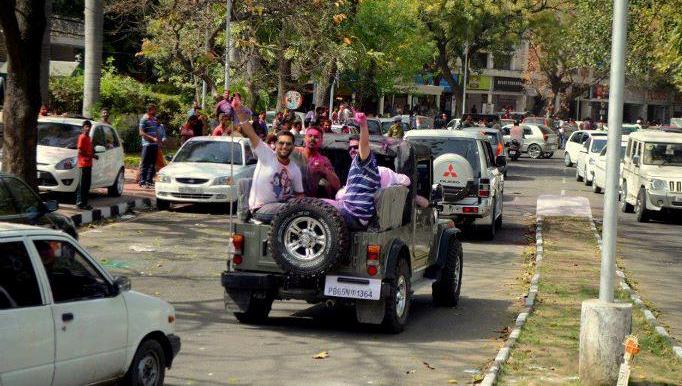 What is the Gheri Route and how did it come into existence and gather momentum to be an iconic part of the college culture ?

The Gehri Route came into being in the early seventies , when we would go to college on our bicycles ! There were only a select number of motorcycles and scooters in those days – by my count there was the Yellow/Chrome Bullet – the Black/Chrome Bullet – the four Black Bullets , with legends like Texas I and Texas 2 ,printed on thier number plates – the Four Bullets with the legend Jain on their number plates – Five Yezdis – 5 Bajaj Scooters – 4 Lambretta’s and I think this was the sum total of the fleet on the Gehri Route .

The route was discovered by sheer chance , for in the days of yore , the Home Science girls would have to walk from the Hostel ,which is still presently located as it was then , to their classes ,which were held in the building , which now houses the Sector 10 Children’s school – opposite the Electricity Board office and the eSamparak .

The girls would walk to classes at 9.00 and return for lunch after 12.00 and then later in the evening go to Sector 10 or 11 market for shopping , or cup of Hot and Sour at Hong Kong in sector 11 , or maybe to hang out for a few hours before the hostel curfew .

This was the original Gehri Route discovered by us and it now probably forms a very small part of what must be a much longer route , with which I am totally unfamiliar .

This then is the origin of the now famous Gehri Route of Chandigarh and my salaams to those who were my partners in trail blazing this route for eternity .

Foray to the Hills – A Memory Revisited .

Sir can you please fasten your child’s seat belt? No. He is very tired. ...

The American Line Up

Having a lot of free time after visiting family and friends on a recent ...

Aesthetics, interactions, exploration, risks, and delays encompass the chief ingredients of travel. Together they ...

A Thousand Kilometres in the Himalayas

Strange activities were observed in the Himalayas in June 2015. Four cycling fanatics were ...

In terms of culture, Delhi is one of the richest cities in our country. ...

Mussoorie is a quaint hill station , situated about 35 km from Dehradun and ...

Lorem Ipsum is simply dummy text of the printing and typesetting industry. Lorem Ipsum has been the industry's standard dummy text ever since the 1500s.